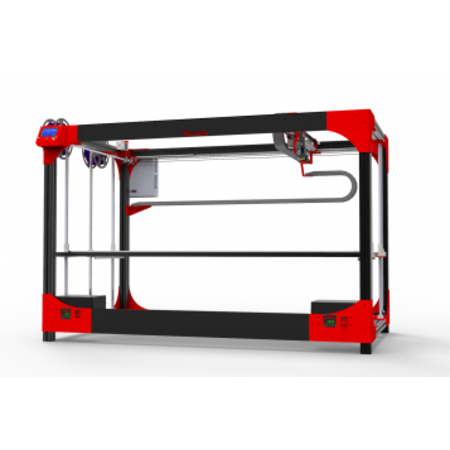 V3, the improved version of the V2

Easier and faster assembly - Assembly time was shorten dramatically. Our target is 1 day assembly and it might take more than one production batch iteration to get there but the new version design allows it. It is now symmetrical in all corners, no more left or right side specific parts. Print head assembly is much easier and overall more intuitive.
Modular design - version 3.0 provides wider hotend selection (V6, Volcano & Super volcano), easier to customize enclosure ACP panels that are easy to drill and cut for any integration need.
Electronics - Version 3.0 is not shipped with Duet3D, a 32bit electronics board with advanced features for the high end 3D printing. With Duet, changing printer configuration does not require firmware recompilation anymore, all you need is to change a configuration file and restart your printer. The duet has built in powerful Trinamic motor drivers that can push a much higher current dynamically on demand to the stepper motors. No more manual current adjustment, the new Trinamic drivers can dynamically increase power as needed. These drivers can also sense pick power demands that might point on stall such as generated by a clog in the hotend. There are many other features that allows better reliability. i.e. when the board senses a temperature error the print job is now paused instead of halted as with Marlin. With Duet also the power failure resume is available making the Duet upgrade an extremely important update for our printers. Duet is developed by Duet3D LTD, a respectable commercial company from the UK.
User interface - With Duet there are new and modern types of user interface. First, is the availability of the large touch screen. It allows easier operation with a touch of a finger while a real time printer status data is being displayed. In addition, the selected default Duet is the WIFI version that allows a full web access from any mobile or desktop. You can load a file right from your slicer software and start your print without leaving your chair. Another available but non-default version of Duet is the Ethernet version board that allows you to connect Modix 3D printer in a secured network environment where WIFI is not an option.
Print Head - The new print head was redesigned to allow compatibility with the advanced E3D AERO extruders that eliminated the old long heat sink design. This family of extruders arrives with a much larger heat sink and a 40mm cooling fan instead of 30mm fan as before. This reduces risk for hotend clogs in a closed
Gerelateerde producten 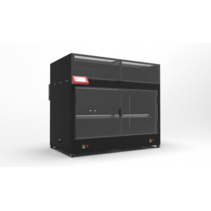